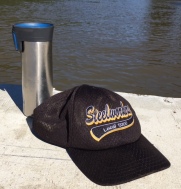 Shaking my head again…there are just things that happen that can’t be explained.  The care God and others have over my son is one of them. Yesterday, we were at our river house. The river was high and muddy from some recent rain so my husband and I decided to do some inside maintenance. He assembled bunk beds while I read a good book, but I was only an arm’s length away if he required assistance. (Which he did only once or twice for a couple of minutes.) But anyway, we were inside “working” while Paul was fishing on the dock. That boy loves to fish! He has spent hours this summer with a pole in his hand and a smile on his face.

Right as my husband was assembling Step 7A bolt into step 7A nut as listed on the IKEA instructions, Paul came in and stands at the bedroom door soaking wet.  After my initial, “Move! You’re making a puddle and I’ll slip and fall!” it dawned on me that my kid had been in the swift river.

Paul calmly says, “Let’s start with the good news. I’m safe and I got my chair but the bad news is that I lost my travel mug and ball cap.”

While he was standing on the dock, his chair blew into the water, he jumped in sans life jacket to retrieve it. He was quickly swept away with his chair in his hands (hard to swim when you are grasping your favorite fishing chair.) He realized he wasn’t going to be able to swim back to our dock so he floated downstream and got out at a neighbor’s dock. Aaaaah. Safe. Another disaster thwarted.

“Thank God you are safe. You have angels looking over you all the time buddy, do you realize that?”

“Yeah, but that was my favorite hat. Uncle Gary gave it to me last year from his work and he won’t be able to get another one since the plant closed.”

“Let’s focus on the good stuff. You are safe.”

“And my mug. It’s the only one I’m allowed to use on the bus and I was going to take it to camp this week. Can I borrow yours?”

“Sure.” (I love loaning my stuff to the kid who as you can see takes incredibly good care of all of his belongings. Insert sarcasm here.) Remember, you are very lucky! You are safe!”

“I know, but I think I’ll pout a while about the hat and mug.”

Oh, brother. I return to assisting George when I hear Paul talking to someone in the yard. I go out to see a man handing Paul his missing hat and mug. It seems this man was fishing on his dock about 1/2 mile downstream when the hat and mug floated by. He “wasn’t going to risk his life to go after it, but it went right by his dock” so he grabbed it. Paul’s fishing license was still attached and he said, “Well, I know where this kid lives.” Of course he does! Everyone knows Paul.

Our river house sits on a 1 mile stretch of the river with houses, camps, and campsites 3 deep in some places. We know very few of our neighbors, but the whole stretch knows Paul. Probably from a previous rescue mission.

After the bunk beds were completed, George and I took a bike ride. We left Paul to fish (with a life vest on!) and we took a little ride. On the way back a neighbor about 5 houses away called out to us for a visit. We stopped by and shared our most recent Paul story. John and his wife Chris have many of their own Paul stories. John started sharing some of his experiences with another couple that was there. We laughed. It’s always easy to laugh at these tales after time. (Not so easy to laugh while they are occurring.) John said, “Paul is going to be all right. He’s a survivor.” I commented that he will survive, but will his parents? We shouted out our appreciation to John for friending Paul and that it “takes a village.”

George admitted that a good sense of humor helps. As we were leaving, the new guy said, “I never met him, but I know I’d love him.” Shaking my head and smiling, I was assured of two things. He will get to meet him and he will love him. Everyone does.

As Paul ages, his special needs do too. I think he will always require some aid from others. (Don’t we all?) As he nears 20 years of age, I’ve been struggling with letting go, but meeting the angels who look out for Paul helps. There are so many stories like today’s story. Not just the part of him being kept safe in the water, but the bonus gift of the returned hat.

Paul isn’t’ just surviving as the Maker of Earth watches over him, he is thriving. I think it’s time for this Mom to back up a bit, resign as the Mayor and just become part of the village. I can attest to how God has used the village in the past and I look forward to being a part of it.

This Villager, however, will be enforcing a Life Vest Ordinance more often!

One response to “Shaking My Head Again”