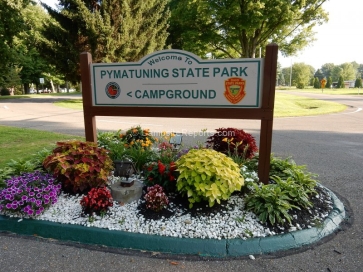 I learned at a very young age that “Ain’t” isn’t a word.  “Ain’t ain’t a word ’cause the teacher said it ain’t!”  I remember so well, though, when Kevin was little and he used to use the word, “Amn’t.”  Amn’t – the contraction for “am not.”  “Kevin, you are going to fall.”  His reply, “No I amn’t.”  It was way too cute to correct. I can’t remember when he stopped using it, but I’m sure he did.  I know that I am now aware that “slippy” isn’t a word and I’ve replaced it with “slippery.”  “Jagger Bushes” are not real and many people refer to them as briars or brambles. I now take a walk to the creek instead of the “crick.” I have corrected my vocabulary over the years and I’ve refrained from speaking in complete “Western PA-ese.”  However…..and this is a biggy….PYMATUNING?!  Seriously, I’ve made it 52 years without ever hearing anyone pronounce this name of a state park correctly.  Is it really Pymatuning?  I was certain it was PymatuMing.  I would’ve bet my life on it.  Why didn’t someone take a moment to correct me on this?  Well, I can tell you why.  I have yet to meet anyone who knows how to pronounce this word.  It only became a topic of discussion when my sister (who is older than me) met someone who said, “Pymatuning.”  My sister was surprised to learn that she has spent her life saying it wrong too….and spelling it wrong to boot!  So, thanks Sis, for clearing this up for me.  I am making this post an official attempt to educate others.  PymatuNing State Park is the largest state park in Pennsylvania, a 16,892 acre park with a 17,088 acre Reservoir which is the largest lake in the Commonwealth!  This place is big enough to have those of us who remember going there as kids or who go there as adults to pronounce it correctly! I can try, but I highly doubt I will.  I may even take my kids to Pymatuming someday.  It looks like a great place to visit no matter how you say it.